How Many Discs Should I Carry? 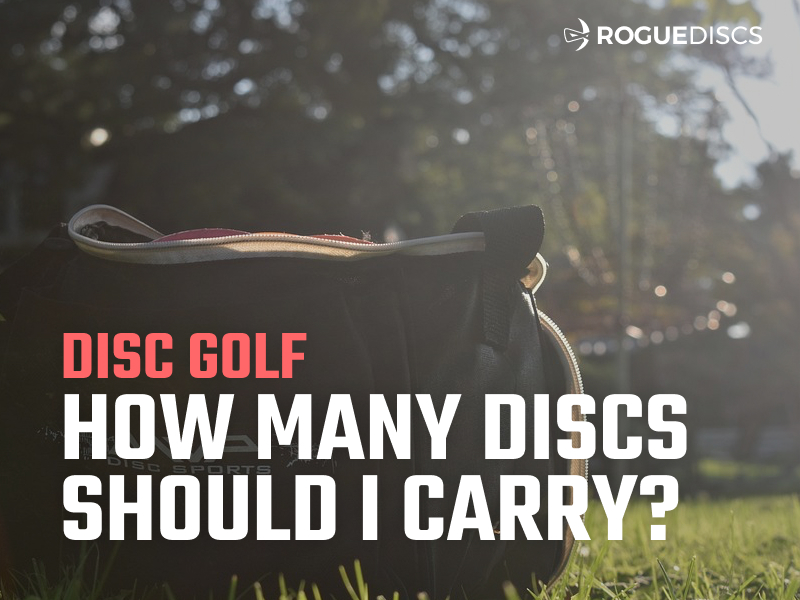 What is more important, the archer or the arrows? Well, we know the archer is the most important, but without the proper arrows the archer is a bumbling mess! Discs come in all different molds and colors and stabilities. It can be a daunting task to figure out just which discs to carry in your bag. After all, experienced players often carry upwards of 20 discs! Most of us also have upwards of 100 discs sitting in a pile at home. Most of these will never be thrown and that is quite alright!

Through the years I have had many players ask the same question; “How many discs should I carry?” This question varies amongst players but the foundation is true, only carry discs with which you have refined via practice. This will allow you a simple mental process once you arrive at competitive rounds.

For true beginners, the best way to start is with three discs; one fairway driver, one mid-range and one putter. Make sure these discs are straight to understable so that you learn proper technique. One mistake many beginners make is throwing overstable discs and crafting your form around your disc. I highly recommend learning to throw a straight mid-range as your first disc. Once you can throw this disc straight and on various angles you can then move up in stability. Start simple and progress from there. Let’s begin by looking inward.

What Type Of Player Are You?

Let’s start right here. Be honest with yourself. What do you throw well? Is it understable drivers? Is it mid-ranges? Is it one certain disc? Do you have any idea?? Whatever it is I urge you to take inventory of your game and put multiple of these discs in your bag across a multitude of stabilities. Learn to throw straight discs and then disc golf will open to you. Throw these consistently! I love to throw mid-ranges and putters and so I have a bag that is skewed much more towards slower discs than drivers. This allows me to do what I do best and make the correct disc choice.

Ask yourself difficult questions and answer honestly. Pry into your game. This will allow you to take inventory of your game and understand what your strengths and weaknesses are. This will allow you to understand what to put in your bag and what shots/discs to throw in the field. As you progress with certain shots/discs you should introduce those discs into your bag. This will allow you to throw these shots in a practice round with a touch more urgency. I urge you to note the progression; field work to practice round to competitive round. Start with straight to understable discs and progress up in stability. Get to know your discs before you throw them in pressure situations.

What Type Of Discs Should I Carry?

After you have advanced beyond the beginner phase, I highly recommend carrying at least six discs. Begin by bagging two of each disc; two fairway drivers, two mid-ranges and two putters. It is wise to bag the exact same discs in multiple stabilities. Get different runs of discs or beat in a certain disc and then place a new one in the bag. Notice the difference in flight characteristics.

The slightest touch of more stability or glide is worthy of a spot in the bag when it is noted and you throw it well. Placing multiple stabilities of the same disc in your bag allows for confidence over time. The grip and feel of your staple discs allows for muscle memory on the course.

Avoid “Do it all” discs. While this may be rational as a beginner as you have a limited supply of discs, it is wise to continue learning to throw different molds. This will allow you to develop your technique without forcing shots. Beginners often force a disc on a myriad of lines because of limited options. This is understandable. Just continue to throw discs the way they were intended and implement more discs into your bag as you continue to feel comfortable with their flight.

Another trap players fall into is throwing “overlap” discs. These are discs that do the exact same thing at the same speed. Many times this is because of a new release or a friend that got an item and recommended it to you. Overlap discs cause confusion and second guessing of what you already have. Sure, try new discs out. But just don’t put them into your bag until you have proven that you can throw them consistently. Then go ahead and replace a disc that does the same thing.

Keep it simple. For the vast majority of players this statement is true. Think about the bag that you carry. How many discs do you throw throughout a round? Most often it is only a fraction of the discs that you carry. For beginners, carrying too many discs can clutter your mind. Keep it simple. Early on in your disc golf career it is best to become adept at individual discs rather than spread yourself thin and try to learn too many discs/shots at once. Spend time honing in one disc/shot at a time and progress from there.

Less decision making makes you a better player. This is true when you are a beginner. Carry less discs. Use the 6 disc rule as a beginner and learn to throw three discs with two stabilities(3 x 2= 6, get it?!). This will allow you to sharpen your skills with minimal mental effort when making shot decisions during rounds. Oftentimes beginners carry too many discs and never learn to throw a single one correctly. This tends to accompany poor technique and may lead to statements such as “ohh that was just the wrong disc” or “I should have thrown the such and such.” I have certainly been guilty of this and I know you at least know somebody who may be guilty of this. Less is more!

Disc golf is a simple game at its core. See target, throw at target. We make it complicated by cluttering our game with too many choices. Start by learning how to throw straight discs/shots with putters and mid-ranges. Then progress up in stability and enjoy spraying discs all over the course until you hone your skills. Be honest with yourself and learn what you throw best. This will allow you to build your bag in a manner that accentuates your strengths. Then continue to learn discs/shots and continue adding discs to your bag. There is no catch-all number for how many discs we should carry in our bag. Simply develop your game and your bag will follow. May all your discs fly true!